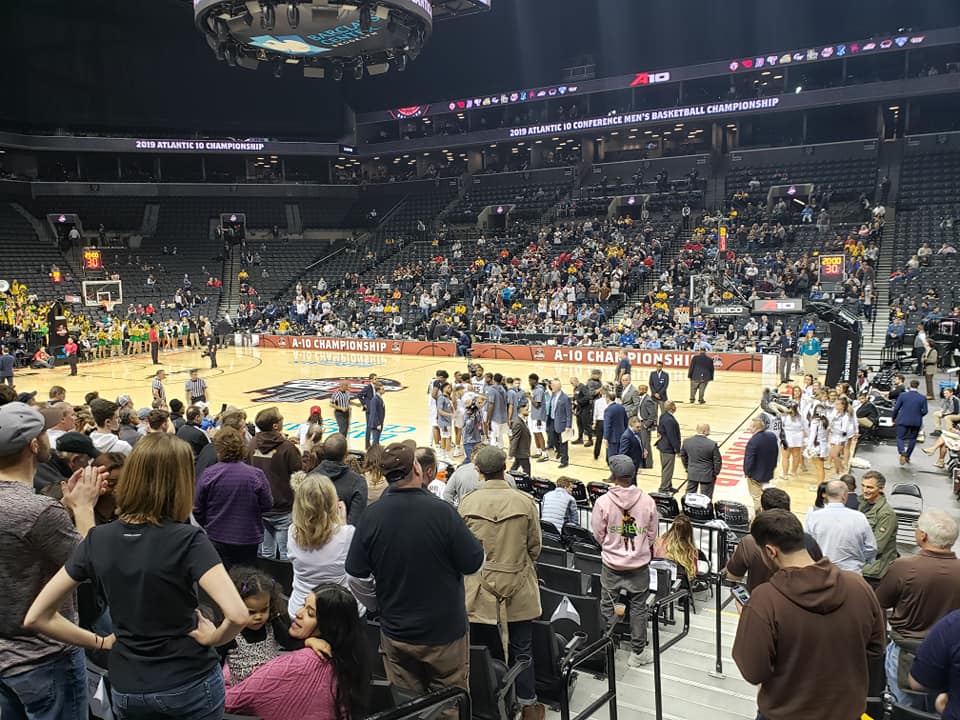 Here we are again! I finally found some time to write a little update as to where I’ve been these past few weeks.

Remember how I said I would try to write more? Well, time to try that again.

Where did we leave off?

I have traveled a bit! For spring break, I flew down to visit my cousin at Daytona Beach! I was there for about four days and yes, I did get a sunburn. No surprise there.

It was such a nice change from the bitterly cold weather at St. Bonaventure. I didn’t have to wear a heavy coat at all! The sun was out all weekend and it felt so nice on the beach. For once I don’t have a lot of photos to post because I was so happy to sit outside in the warm weather.

Then it was back to work…

I drove back to school on Monday, then came back to Jersey on Thursday. That weekend the St. Bonaventure men’s basketball team played in the A-10 Tournament in Brooklyn.

Being part of SBU-TV, I traveled to the Barclays Center to cover the game! I spoke with so many fans before, during and after the game. Friday we won the game and the Bonnie’s were electric! Sadly, we lost in the finals, but it was so cool being able to cover an event like this!

I had my own media pass with my name on it! My name! Me! They gave us free bags which was a nice little surprise. I walked around the stadium with other members of the SBU student media and felt way too cool. I got to walk on the basketball court and talk to a lot of cool sports people, too.

The experience overall was too cool! I was exhausted by the end of the day, but I was proud I got media credentials for the game and did some fan coverage for SBU-TV. It felt really rewarding to see positive comments on our social media posts and to have some Bonaventure alum stop me and say “great newscast the other week!”

Since becoming an executive producer for SBU-TV, I’ve put a lot of time and energy into making the newscasts look great. I tend to forget my work is a little different because of how much time I spend on it. A lot of people got really excited for me when I talked about the different stories I worked on. So it felt pretty cool to sound like an adult with a job and not just a college kid at a basketball game.

So what am I doing now?

Now I’m back to ‘normal’ or at least my normal. Classes are going well, newscasts are airing weekly, I’ve been playing softball with the club team, and I’m trying to get an internship this summer. I have finals coming up in a few weeks but I don’t want to worry about that yet. All the normal things a college student would be working on.

I’ve been trying to work on my photography a little bit as well. I like to take photos of nature on the Allegheny River Trail but I also have started taking photos of my friends. Here are a few of my favorites I’ve done!

Most importantly, I’ve been trying to plan a cool trip to take this summer! Remember how this is a travel blog? Even though I haven’t been traveling as much as I did when I was abroad, I still want to try to take a trip somewhere new this summer. Hopefully, some things fall together and I’ll have some exciting updates to come. Stay tuned!

Want to learn who I am?