This weekend Notre Dame beat Florida State in South Bend, Indiana, and I witnessed it all.

I experienced my first college football game last Saturday! Let me tell you, it was a trip and a half.

I flew into Chicago Friday morning then hopped in a car headed to South Bend, Indiana.

After a long day of car rides and flying, we finally arrived in the late afternoon. I got to see my aunt, uncle, and cousin right away. Quick shoutout to them for being such great hosts!

I hadn’t seen them in what felt like years (but I think was only a few months). We all ate and drank while catching up on each other’s lives. There was a lot of talk about plans for Saturday, like where we were going to be before the tailgate, where the tailgate was going to be, how the football team was going to do and so on.

My family and their friends all hung out in a bar next to campus for a bit Friday night. The music blared from the speakers and a bunch of sports played on the TVs. It was a pretty good start to the weekend.

Soon enough, the sun came up and my cousin woke me up bright and early to get ready for the game.

When did the game start? Oh, kickoff was at 7:30pm. So obviously we needed to start at 10am.

It was going to be a very long day.

I met my cousin’s friends and followed them around from house to house that morning. Everyone was sporting shades of blue, gold and green under many (many) layers of shirts and jackets.

We finally strolled over to our tailgate at 1pm (I know, only 1!). Walking through the parking lot, I saw people eating, drinking, playing football and warming up by a grill. There was a myriad of blue and gold tents next to the cars lining each row. As we passed the different lots, the scent of charcoal and beer wafted through the air.

We reached our spot and I grabbed as much food as I could before it froze. The high for the day was 28 degrees and we were staying outside until the late hours of the night. I felt weighed down with all the layers I had on, but still was shaking to stay warm.

That afternoon was filled with jokes and good company. I had never been to a college football game before, let alone a Notre Dame game, so I was super excited to be a part of it!

My family has been big Notre Dame fans for as long as I can remember. My dad would always have their games on and we’ve all seen “Rudy” a few times. My cousin studies there now and my uncle played lacrosse during his years in college. He was sure to bring up his glory days a few times before the game and share a few laughs with other graduates.

It was finally time for the game and we funneled our way into the stadium. After handing my ticket to the usher, I looked over and saw a big yellow sign. The iconic words “Play like a champion today” seemed to be preaching to the fans walking inside.

Walking out to our seats, the big stadium lights hit the team’s golden helmets and made them shine. They were all sporting bright green that night, different from the navy uniforms they usually play in.

The marching band roared as the team kicked off to start the first quarter. The crowd was roaring to support the boys in green. The Irish scored within the first two minutes of the game, and everyone got loud!

The Fighting Irish beat the Seminoles 13-42! We all stayed in our seats to sing the Notre Dame Alma Mater together. Everyone put their arms around each other and swayed to the rhythm of the band. It was so surreal to be part of something so unifying and positive. To see the pride everyone had for their school gave me the biggest smile, and being part of it made my entire night. I forgot how cold I was for those few minutes and enjoyed the opportunity I had to see this win.

Since it was the last home game, seniors were invited to go on the field after the game. My cousin is a senior, so I got on the field with her to take a bunch of pictures with her classmates. 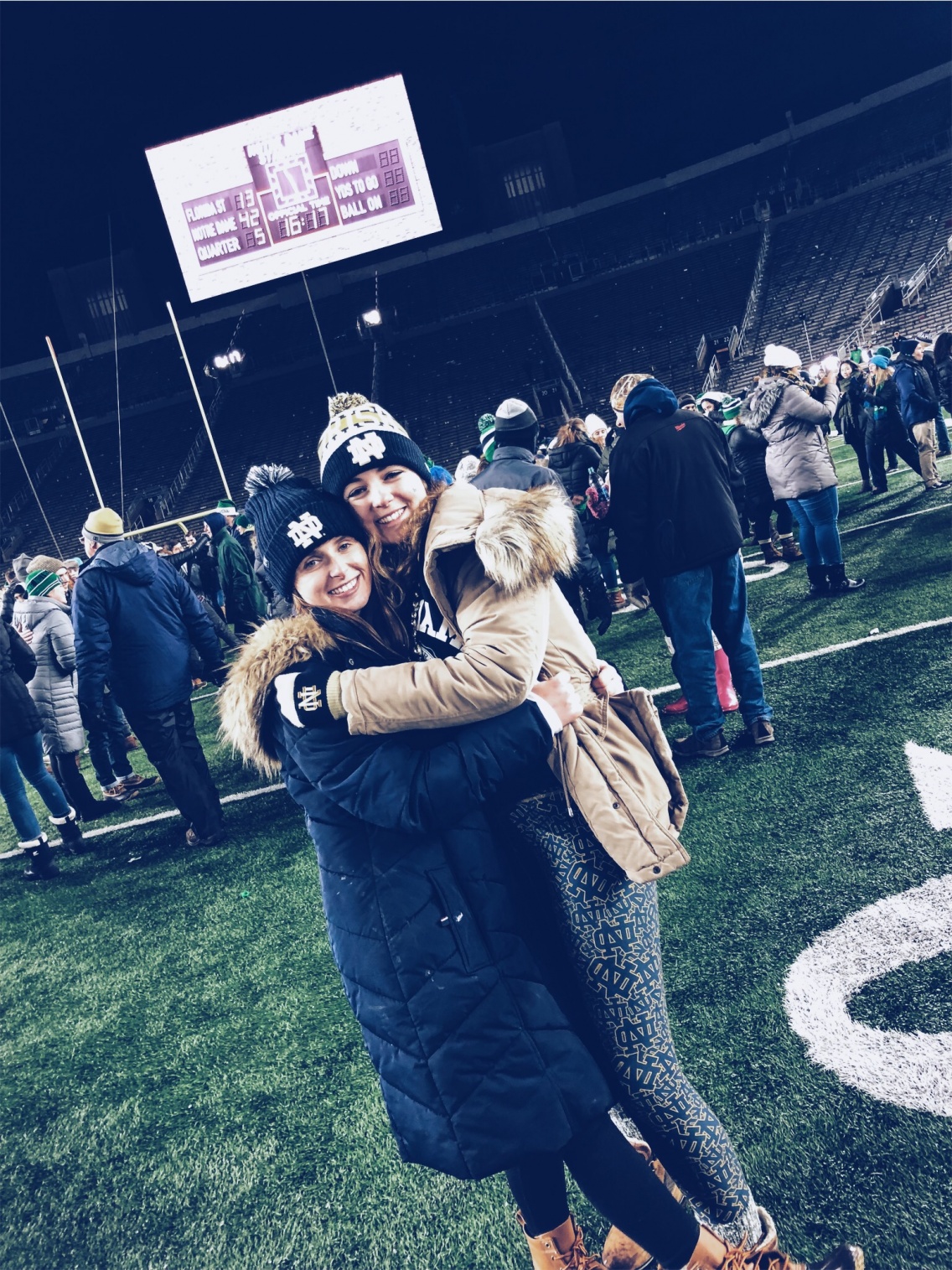 We eventually left and walked back to her house, where there were plans of going out to a bar to celebrate, but our fatigue got the best of us. We got a midnight snack and called it a night.

I got back to Buffalo last night and found myself humming the fight song for the hundredth time that day. Shoutout to Molly for being such a great host!

I met so many cool people, spend some time with my family and got to see Notre Dame win!

Where to next? That’s still up in the air. Thanksgiving is up around the bend, then I come back to school for finals then I have a long break! I’m still planning on going to new places, so make sure to stay updated by following this blog and my Instagram.

Want to learn who I am?